There are many tales from the Bataan Campaign. Some are fairly straightforward in that a given person is assigned to a unit and it is possible to follow that person and the unit through the campaign.

Other stories are more complex, when due to circumstances and/or the fortunes of war, a given person’s situation changes drastically. Such is the case with an Army Air Corps Corporal by the name of Harold A. Bergbower.

Harold A. Berbower in his early days of military service. (Courtesy American Defenders of Bataan and Corregidor)

Born in 1920, Bergbower joined the Army Air Corps on 12 May 1939. A year later, he went to school at Chanute Field, Illinois and trained as an air mechanic. In January, 1940, he volunteered to serve in the Philippine Islands.

When the war began Berbower was an aircraft mechanic in the 28th Bomb Squadron. He was wounded in the initial attack on Clark Field and taken for dead to the Fort Stotsenburg hospital, where he later awoke in the hospital morgue. He gathered his wits and his shoes and left to return to his squadron. 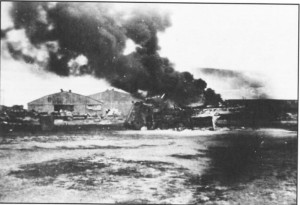 Clark Field burns in the aftermath of the Japanese air raid of 8 December 1941. (Courtesy The Bataan Commemorative Research Project Scrapbook)

Although a mechanic, Bergbower apparently flew three aerial missions with his squadron, including one against Japanese warships as an impromptu aerial gunner in an old B-10 (see video at link below), before it came time in late December, 1941, for the evacuation of Clark Field. Dropped off at his bivouac to retrieve some personnel belongings, his ride apparently did not return. But for some Philippine Scouts of the 26th Cavalry happening by with an extra horse in tow, he might have been captured at Clark by the approaching Imperial Japanese Army.

Philippine Scouts of the Machine Gun Troop of the 26th Cavalry Regiment (PS) ford a river just prior to the Japanese invasion. From the cover of the March/April, 1943 issue of “The Cavalry Journal”. (Courtesy Historum.com and Philippine Scouts Heritage Society)

Not knowing where his unit went in the haste and confusion of the movement out of Clark and to Bataan, Bergbower left on horseback with the Scouts and rode south for the peninsula, where he remained with the 26th Cavalry (PS) and served in the unit’s B Troop for some 2 ½ months, into March, 1942.

A 1/6 scale action figure of a 26th Cavalry (PS) trooper. It won first place in the WWII 1/6 scale category of the 2005 Weekend of Heroes Convention. The artist is Philip Garcia. (Courtesy Philippine Scouts Heritage Society)

Bergbower described his service with the Philippine Scouts in a 2007 interview for Rutgers University conducted by Heather Witherspoon: “So I fought with the Filipino Scouts on horseback until the middle of March, about two and a half months. … By that time, the food was so scarce that they used their horses and the mules from the 26th Calvary Unit as food.”

In the interview Bergbower (HB) told Witherspoon (HW) about one memorable event in his adopted cavalry service:

HB: When I served with the 26th Calvary I was going into General King’s headquarters during a (air) raid and, of course, you always dismount a horse from on the left side, and a bomb, went on the right side of the horse, and it killed the horse, and I had a piece of shrapnel went through my finger and into the saddle and I couldn’t get it out, off. So …

HW: You couldn’t get your finger off the saddle?

HB: Couldn’t get my finger off the saddle, and so I finally got my knife and I cut the strap and got the saddle off the horse and I carried that into the headquarters and the General says, “You didn’t need to bring the saddle with you,” and I said, “Well, if you can get it off, my finger off of that saddle, I would appreciate it.” [laughter] They finally sent me down to the woodwork shop and they chiseled it out.

HW: Oh, my. So you went in to see General King with a saddle on your finger. [laughter] You also, well, you said that the horse saved your life.

HB: Yeah. It took all the shock pretty well, except for my hand was still on the saddle, until I reached the ground. Then I couldn’t get it off.

Bergbower described his subsequent departure for Mindanao to rejoin his unit, the 28th Bomb Squadron, elsewhere in this interview: “The Scouts, asked me what I was going to do and I said, “Well, I don’t know. My squadron is already on Mindanao.” He said, “Well, we’re going by outrigger to Mindanao. You are welcome to join us.” So, five or six days in an outrigger, in the open waters, boy, [that’s] scary. But we made it to Mindanao, a place called Cagayan. I went down to where my squadron was, they were at the Pulangi River, the second line of defense from the city of Davao, and there I fought in the infantry until the surrender went through.”

Bergbower was subsequently imprisoned on Mindanao, first at Malaybalay and later the infamous Davao Penal Colony. He was eventually sent to Japan aboard a Hell Ship and ended up working as a slave laborer in a steel mill in Toyama, Japan.

After the war Bergbower stayed in the service, transitioned to the Air Force and retired as a Chief Master Sergeant (E-9) in 1969. He married after WWII and had three kids. He was the National Commander, of the American Defenders of Bataan and Corregidor (ADBC) in 2005-2006.

In 2002, he returned to the Philippines with his daughter. “…my daughter, she didn’t know really too much about what I went through. I got an e-mail about a trip going to the Philippines for the sixtieth anniversary of the fall of Bataan, and I had kind of decided I would go, and then I decided I wouldn’t go. But my daughter got a hold of this and she said, “We’re going,” so, we went…It was a fantastic trip, fantastic. We stayed at the Manila Hotel when we were in that area. We made the trip up to Camp O’Donnell and Camp O’Donnell was the first POW camp in the Philippines, and they have planted thirty-one thousand trees at Camp O’Donnell, one tree for each guy that died at Camp O’Donnell, and that’s American troops and Filipinos.”

More recently, Bergbower went on another overseas trip, this time back to Japan, as part of the POW/Japan Friendship Program which started in 2010 and has now taken place six times. Bergbower’s daughter wrote in early 2013 of the value of this initiative:

“This program has really helped my Dad. For years, Dad would have nightmares after any talk, show, or sometimes just because of his years as a POW. Since our visit his nightmares have gone. I cannot really put in words what that day at the Japanese Factory in Takaoka, Toyama, Japan did. He has not forgotten or totally forgiven but there is now a peace to his remembrance. If you are able please consider participating in this program. My Dad’s memory is failing on his daily activities but he continues to recall his trip to Japan. Now when he talks about his POW experience he can now add closure. The audience is amazed at his story. I was honored to go with Dad to Japan. If you are a descendant please talk with your parent about the program. It truly is a life changer.”

Bergbower may be retired, residing in Arizona, but he still works to share his experience to younger generations.

Ms. Debra Bergbower, the daughter of retired Chief Master Sgt. Harold Bergbower, 26th Calvary Regiment air mechanic, holds the microphone for him during his guest speaking for Focus 56 at Luke Air Force Base, Ariz., May 15, 2014. Bergbower is a POW and was help in captivity from May 1943 until August 18945. (U.S. Air Force photo by Senior Airman Devante Williams)

He also appears at military bases and is interviewed by media, such as in this short (2:43) video story just released on 4 November 2015:

May those who are able to meet and hear CMSgt Harold A. Bergbower, USAF (Retired) pay attention, and learn, while this man is still among us. Hand Salute to Chief Bergbower!

Retired Chief Master Sgt. Harold Bergbower was born May 11, 1920, in Newton, Ill. He joined the Army Air Corps May 12, 1939. One year later, he went to school at Chanute Field, Ill., and became an air mechanic. In January 1940, he volunteered to go to the Philippine Islands, where he stayed for a year and a half, until the attack on Pearl Harbor. (U.S. Air Force photo by Senior Airman Grace Lee)

3 thoughts on “Saddle Up! An Airman who joined the Cavalry on Bataan”